Over The Past Month 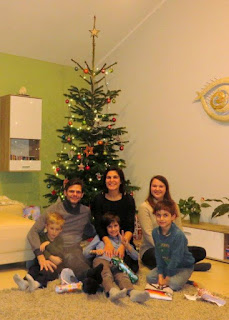 It has been almost a month since my last update!

Time has been going by extremely fast as I approach the end of my time here in Austria.

Since it has been so long, I guess I'll start where I left off!

Christmas was so much fun.  Out here Christmas is actually celebrated on the 24th as opposed to the 25th.  The difference in dates didn't really make much of a difference other than my family and friends in the states wished me Merry Christmas on the 25th.  We spent Christmas quietly at home baking, cooking and just enjoying the day.  The following day we went to either of the grandparent's houses to talk and eat.  I had an excessive amount of Christmas cookies (worth it). 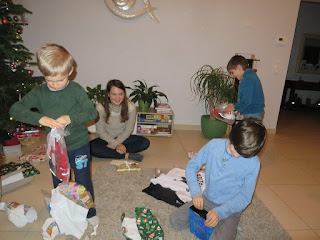 Once Christmas had come and passed, we made our way to Annaberg for the week to go skiing! 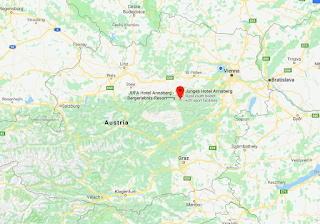 Annaberg is in Lower Austria and isn't too far from Mariazell.

The views were absolutely spectacular!  The mountains are so beautiful. 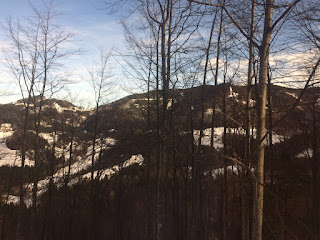 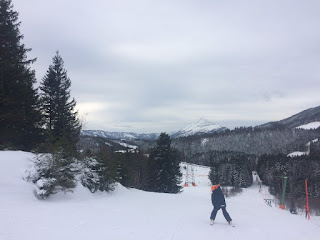 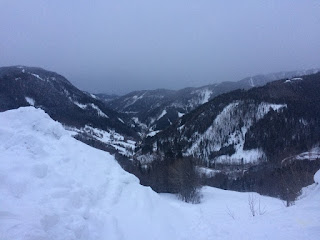 Some views from the top of the slopes

I loved skiing.  It was so much fun.  It took me a bit to get used to skiing again.  I don't remember the last time I went before this.

Aside from skiing, we also got to do some sledding on one of the smaller slopes!  The sleds they use out here normally are what would seem like typical old-timey sleds, at least to me they do. 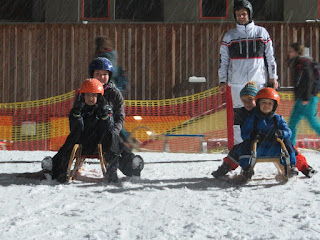 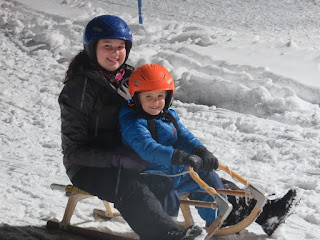 Also, I think I found my new favorite Austrian food... 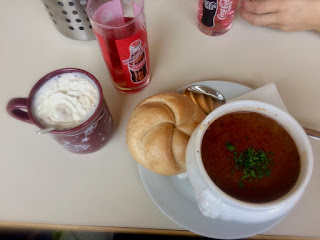 Austrian goulash soup.
Edit: I have been informed that is actually from Hungary... My bad

I ate a lot while we were in Annaberg.  Its warm, dense, and overall just the type of thing you would want to eat when you're tired and cold.

Toward the end of the break, one of my close friends (the other exchange student in my class that I mention sometimes) had a seizure on her way to go on holiday which ultimately lead to her being diagnosed with epilepsy and being sent home 6 months early.

Shoutout to Jeannie for being an amazing person and friend!!!!  I miss you!! 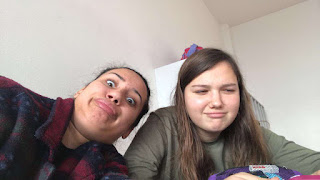 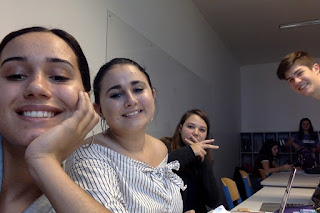 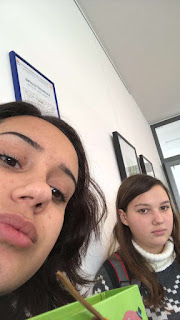 She is so amazing.  We shared a lot of little adventures in Austria

This is also the reason I haven't updated in a while, my mind was just all over the place and I couldn't focus and write.

Recently, the town that my school is in had a local ball!  It was a lot of fun.  There were two main parts of the ball:
A dance floor with a live band and pairs dancing away on the floor and
An area comparable to a club or party with modern music being played by a DJ. 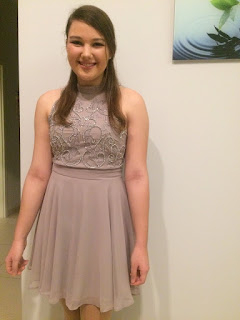 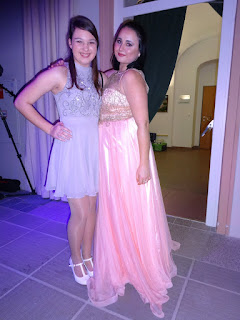 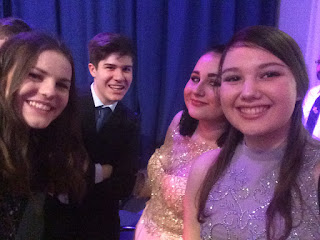 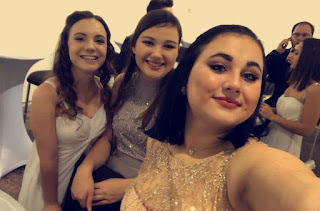 Most of the older adults were where the live band was either sitting and talking or dancing, whereas most of the student-aged people were where the more modern music was playing (big surprise right?)

I have no clue how to dance with a partner, but I enjoyed watching others dance and listening to the music.  I mostly just followed around friends and the other girls in my class.  It was so much fun!

Speaking of classmates, this seems like the perfect time to introduce some of them! 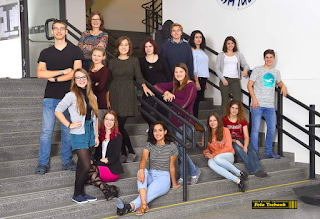 This is my class!

I can't even begin to explain how amazing they all are.  Each of them is extremely bright and so nice.  They have been so welcoming to both Jeannie and I and so helpful in helping us with our not-so-great German (: 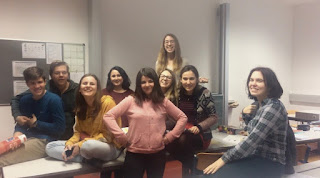 Each of them is so unique and interesting.  They could literally have their own TV show.  I would watch it. 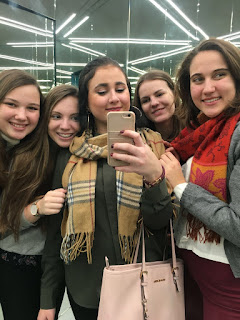 I feel like I have so much I could say about them yet I'm at a loss for words.

Hannah, on the far right, is the fearless leader of not only our class but the whole school.  She always comes to school wearing something extremely fashionable.  I don't know how she does it. 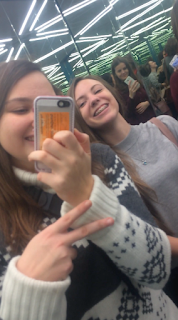 Carina just about always has a smile on her face.  We seem to bond over yelling each other's names in weird voices. 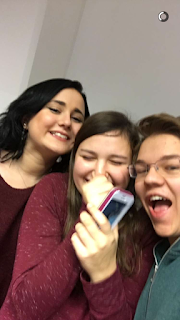 Jaqueline and Lennart are my two desk neighbors and I am so thankful for that.  Lennart always makes sure I know whats going on and fills me in on jokes that I may not have caught in German. 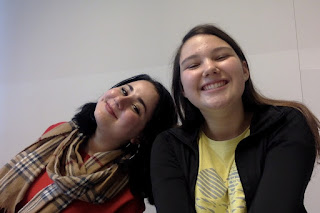 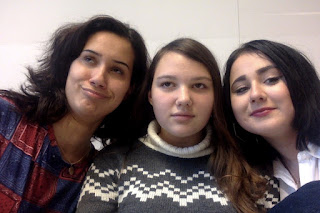 Jaqueline has been my friends since the first week, which I guess she was kind of forced to be since she sat next to me (; 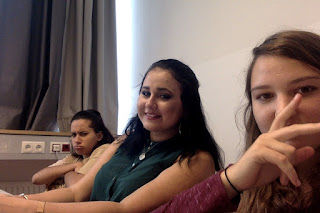 Both she and Jeannie kinda became my closest friends out here.  Jaqueline was almost our in-school host mom since we always turned to her when we had no idea what was going on.
I don't have a whole lot of pictures of people in my class and I don't have one of each person other than two class pictures I showed earlier. 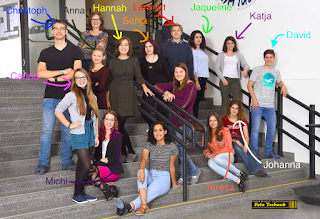 Dear 7a, I apologize if I screwed up any of your names...

There is Michi who sits in front of me in class.  She has such a cute and perky personality.
There's Sonja, whose art skills are amazing.  She is so bright and has such a beautiful smile.  She also has some of the most relatable facial expressions.
There's Katja who is so sweet.  She sits on the other side of the classroom than I do but occasionally we will look over at each other and laugh for some reason.
Christoph and David are the only other guys in our class other than Lennart.  They are both pretty funny.
Johanna is so cool.  May sound a bit vague, but she is so cool.  She has been really helpful with my learning German and she always has little cool stories about all the places she has been.
Anna is so smart and sweet.  She always has something good to say during classes.
Teresa also sits on the opposite side of the classroom with Katja.  She is quite witty and quite bright.  We mostly just say comments to each other now and then.

I am going to miss them so much.  I could not have asked for a better class.

Well, I think I covered most of the things that happened in the last month, at least the bigger things.

Hope you all enjoyed my update!

Posted by Cora Soash at 9:54 AM No comments: