This weekend it will have been a month since I left for Austria!  I feel like the past week or so has gone by pretty quick.  Even though I am still figuring some things out, I am definitely a lot more settled than I was at the very beginning.
This past week has been quite fun and full of travels!  I went to Vienna twice and to Krems once with my host family.  We have also gone on a couple walks and a bike ride! 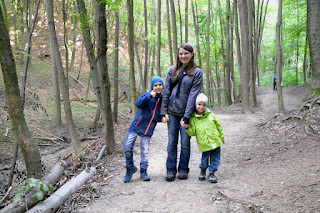 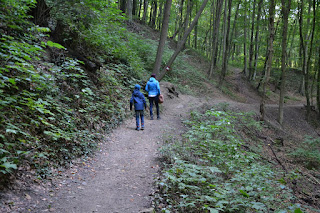 The weather has been so nice lately, not to hot and not to cold. Tulln has a very nice walking/biking path that we went on.  There is also a little stream that runs along side the path.  It all looked and sounded beautiful. 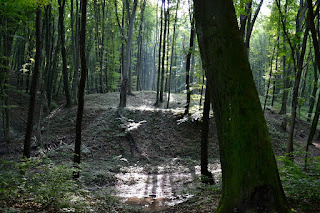 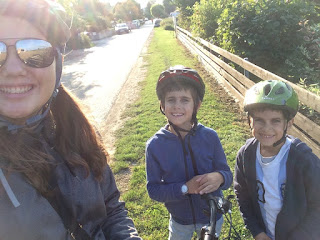 The weather was also super nice in Vienna.  I can't explain just how beautiful Vienna is!  All the buildings, churches and cathedrals are just breathtaking!

I think I have managed to figure out the bus, subway, and tram systems.  It works about the same as it did in Washington D.C. and NYC.  Sometimes its fun just to hop on a bus or tram and see the sights it takes you by.


Also, I managed to get myself a dirndl
(a traditional Austrian dress)!

I'm thinking of taking it to wear at the STS Austria orientation meeting that I have this weekend! :D

For the next few days, I am running the STS Snapchat account, so I get to share about my experience with a ton of people!!  It is a little intimidating but fun and I've been able to chat with other exchange students as well!

Thats all for now!  I hope you enjoyed this update!

Quick fun German lesson before I go on:

This week has been pretty chill and not a whole lot has happened.  I think I've gotten into routines at home and at school and now have more of an understanding of whats going on.

I did, however, make my first trip to Wien!  I didn't see too much.  I went there for a German course and I was able to see Wien from the subway station to the office where the course was, which was only a few blocks.  Though, as far as I did see, it is beautiful!
I took a train to get from where I live to Wien, then a subway (or "the underground" as it is called here) to get to a bus stop, and then a bus from the underground station to the office where the German course was.  I went on my own, which was a bit scary but still fun!  It was like the same chaos you get in a big city except no cellular data and everything is in a different language.  I only ended up getting on the wrong train once!  Don't worry, I eventually got to Wien. (;  I also met another exchange student from Italy during the course who is studying in Austria through the same program that I am!

I just started going to a lower-level German class in school with the other exchange students (there are 4 of us altogether).  The other students in the class are around 10 years old and are learning basic German grammar so we fit right in.  It has been so cool meeting other exchange students.  We all come from different places but we all have the common ground of being an exchange student in Austria, and we all share similar struggles with learning the language and being at a new school.

Being out here has really made me more appreciative of cultural differences.  I've been able to bond with other students in my class through learning and sharing about our differences and finding similarities.  Whenever I ask, they seem excited to tell me about Austria/Österreich and to teach me German.
I've learned so much and I also have so much to learn!

Well, thats all I have for this week.

By the way, here's some cool candy I found at the train station vending machine: 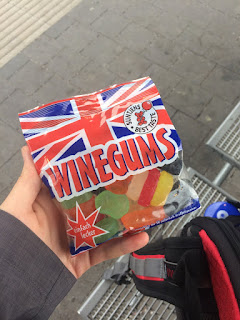 Don't worry, there's no actual wine in them (: 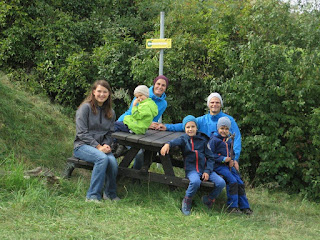 It has been about 11 days since I got here.  Each day gets a little easier and I learn a little more.  I keep picking up words and phrases each day and my family and friends have been so patient in helping me learn and pronounce them.  Pretty soon, I will most likely be starting a German class to help.  I feel a lot more settled and less lost than I did a week ago.

This past week has been good overall.  During the weekdays, I am at school until mid-afternoon then at home for the rest of the day.  At home, I mostly spend time with the boys or the whole family.  The boys and I play a lot of Uno.  They knew how to play it already so its pretty easy to play it with them.  They also enjoy when I play my ukulele (or when they get to try playing it).
The weather out here has been beautiful and moderate with only a couple rainy days.  We got the chance to both bike and walk through our town/village.

Our bike ride took us to a park in another small town/village where we stayed for a bit and played.  The photos below were taken by my host mother (: 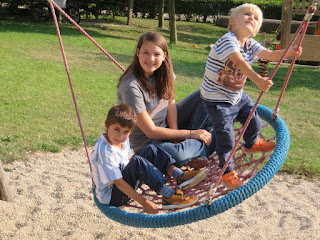 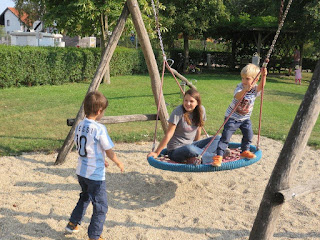 Our walk took us up a hill with a vineyard and that overlooks our town/village, Königstetten
(Koo-nig-shte-ten).

School is going pretty well.  Since I don't speak German yet, I don't understand what is going on in half my classes.  I've been trying to take notes in the classes that are taught in German and translate them to get at least somewhat of an understanding.  It gets a bit hard to take notes because some of the teachers' hand writing is hard to read, but this gives me the chance to be social and ask for help!  I've managed to make a few more friends, or at least people I can talk to. The school is really big and very nice.  I learned the hard way that we have to wear indoor shoes in the school (I got called out by a teacher).  Also, our school is right next to the Danube (Donau in German).

Fun fact: the Danube is the longest river in Europe and flows from the town of Donaueschingen, in the Black Forest of Germany, to the Black Sea through the Danube Delta in Romania and Ukraine.

I've really been enjoying this experience thus far.  I am so happy for this opportunity to explore and embrace a culture that I'm not used to.  It does get hard sometimes.

Well, I arrived safely in Austria!
I struggled to find the exit at the airport but when I did, my host family was there waiting!
My host family is so nice and helped me settle right in.  I spent the morning that I arrived unpacking and the afternoon taking a nap.  The evening I spent playing with the boys.  The boys do not speak English, only a few words.  We mostly communicate through smiles and a few German and English words.  They have been so patient with me.  Sometimes they ask me something and I have to ask my host mother what it means and how to answer.  They know a few English phrases that their mom taught them like "Do you want to come with me?" and "Good night.  Sleep well."
We play a lot of Fußball and we like to jump on their trampoline.
Sometimes I will point to random things and ask them what it is and they tell me what it is in German.  They will also do they same thing and I tell them what it is in English.  So far, I have learned a few phrases and words here and there.
I have only had a couple days at school.  So far, the school days have been really short.  They have been only from 8:00 until 11:45, 12:45, or 13:40 at the latest.  The classes rotate each day of the week.  So one class  I will have once a week and another I will have first on Tuesday and third on Wednesday.  I stay in the same room with the same students for most all the classes, except for chemistry where we go to a lab and foreign language where some students leave for another language and some others come in for a specific language.  Right now I use this time to study German because the foreign language (Latin for me) is taught in German and I speak neither.  For now, I am totally fine staying in one room all day, it is one less thing to worry about.
Mostly, I have had to just observe and repeat what other students do to figure out kind of what goes on at school.  Like that we all stand whenever a teacher walks in, that there are short breaks after every class, and that we can eat in class.
The first day was pretty overwhelming.  Half of my teachers teach in German while the other half teach in English.  The only class that I really understood anything on the first day was English (as a second language).  All but one of the students in my class speak both German and English and default to German.  The other one is another exchange student (who came by a different program than me) who is from the Quebec area of Canada and is French-Canadian.  She only speaks English and French right now, but is trying to learn German as well.  Neither of us really know what is going on in class half the time.  We communicate a lot through confused facial expressions across the classroom.
I'm sure the days will get a little easier as they go on and as I get into a rhythm.  It has only been a few days so far so things are a bit chaotic.  Time goes by pretty slow for now.  It feels like I have been here for over a week.  I say that now but I'm sure I will look back and see just how fast they did go.  I am definitely looking forward to what is to come!
Thanks for reading!
Tschüß!
Posted by Cora Soash at 5:10 AM 3 comments: