I hope October has treated you well thus far!

It's just starting to feel like fall here.  The leaves are turning and the weather is getting cooler and staying cold all day (as opposed to cold mornings with warm afternoons).

This past week has been pretty calm.  Though, we did do some fun stuff this weekend.

Saturday afternoon, one of my host brother's friends came over and stayed until the next day.  Later on, we went for a walk along a path that goes through our village.  The weather was a little chilly but still very nice. 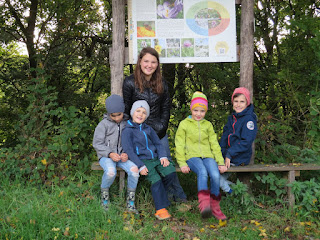 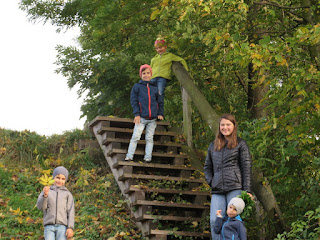 Though Halloween isn't really celebrated out here that much, my host mother got us all some pumpkins to carve for Halloween! 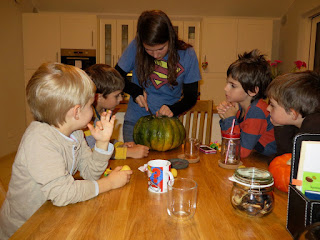 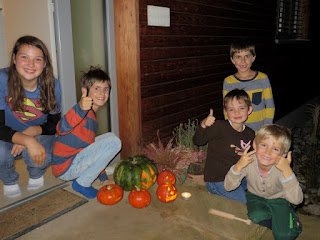 I also had a Kinder Surprise egg for the first time!  If you don't know what they are, they are a hollow chocolate egg that holds a capsule with a little toy in it. Apparently, they are illegal in the US, so I can't bring any back with me :( 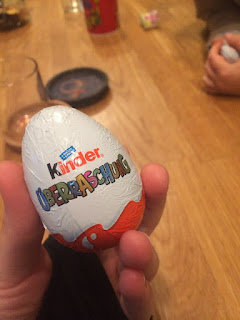 I got a cute little animal print stamp in mine.

I have gotten a lot more comfortable with and better at speaking what German I know.  My classmates have started speaking more and more German with me by asking me simple questions or giving me simple answers in German.  Though, German grammar can be a headache...

That is all I have for this week!

I'm definitely looking forward to not having school for the next week and a half.  (:

Posted by Cora Soash at 9:28 AM No comments:

I feel like October has really flown by so far.

Last I checked I thought it was still the end of September.

This past week has been fairly eventful and full of a bunch of little adventures and experiences.

Friday I went to Vienna with a friend from school.  I don't remember all that we did, but I do remember that we found a small cafe that has cats in it just walking around.  The cats were so cute but they definitely ruled the place.  They seem to know that people will follow after them to pet them.

Saturday my host family and I went on a hike with a bunch of families from my oldest host brothers' school.  I was able to make conversation with some of the parents and I also met another person here on exchange from Taiwan.

Sunday morning we went to Vienna by train.  We got some roasted chestnuts from a small shop and walked past the Schönbrunn Palace on our way to the zoo.  The palace was quite beautiful, though I didn't take any pictures because I was too busy staring at it while also eating the chestnuts.  The zoo was also very nice and fun!  Part of the zoo was a big circle with a restaurant in the middle and with the exhibits as the border.

We got back from Vienna late afternoon and later went to a jazz concert.  They played a lot of Frank Sinatra and the two vocalists and band were amazing.

Tuesday left me pretty emotionally exhausted.  Our class and one other class from school went on a trip to the former concentration camp Mauthausen.  We toured around and in the former camp and saw the memorials, where soldiers spent free time, where the prisoners worked, where the prisoners lived, and where prisoners were killed.  We had a tour guide that gave us a tour spoken in German.  The teacher who was with us and a friend of mine helped translate for me.

It is one thing to learn about the Holocaust in schools and hear about it from time to time, but it really hits you when you're actually inside the former concentration camp and can look right into the gas chambers where so many people were killed.

I'm glad that I have friends here to talk through the trip with.  It was a lot to process.

On a bit of a lighter note, during the bus ride back we passed by a couple buildings for a company called OBI.  I had to take pictures of the signs and I almost immediately sent them to my brother. 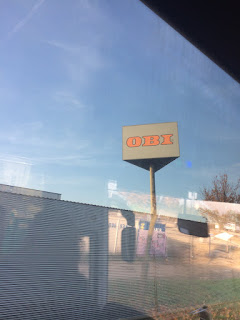 I think he appreciated it.

Yesterday I got the chance to go to Vienna with another friend from school.  We spent most of the time just walking around the center.
She also got me some Sacher Torte from the Sacher Cafe in Vienna.  It was SO good and I understand why she wanted me to try it so bad. 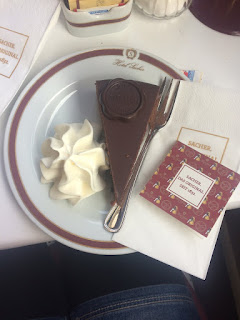 Yes, it tasted as fancy as it looks.

Overall, it was a good week!

Posted by Cora Soash at 8:50 AM No comments: 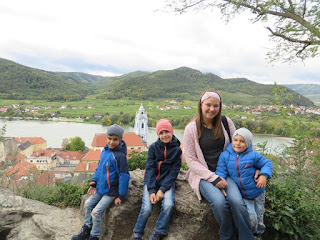 I hope your week is going well so far!

On Saturday, we went to Dürnstein.  Dürnstein is a small town that sits along the Danube and has the ruins of the Burgruine Dürnstein, which is a castle that overlooked the town.

We started in Krems and took a boat to Dürnstein.  From there, we climbed up to the ruins.

The first picture is the castle ruins from below and the rest are pictures taken while in the ruins. 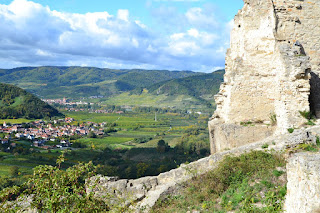 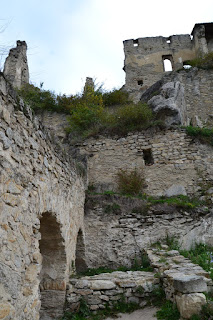 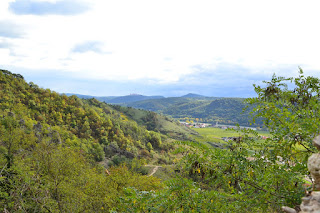 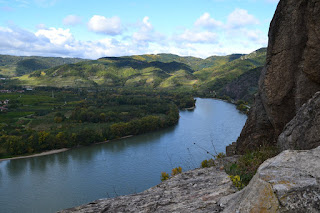 On Saturday, I also got the chance to make french toast and bird's nest (french toast with an egg fried in the middle).  My host family had never had it before and I think they really liked it!  I've only made it maybe twice before but I think I did ok (:

This week at school, everyone, besides the other exchange student and I, are gone for school trips.  So, this week we are in a different class!  As I've mentioned before, we stay with the same people for almost all our classes, so being in a different class gives us the chance to meet some new people!  Don't get me wrong, I love my class, but it is also cool to experience something a little different.

You can bet that I'll be learning how to make them (;

That is all I got for this week!

Posted by Cora Soash at 8:54 AM No comments:

The weeks seem to be going by pretty fast.  Wednesdays come so quick and I keep forgetting that I post these on Wednesdays. 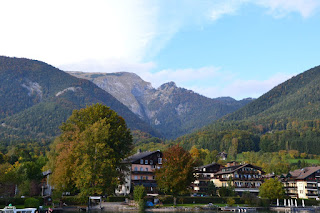 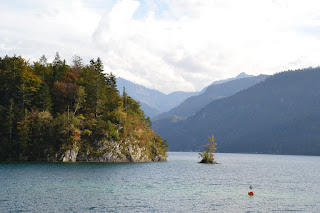 On Friday, we started driving toward Salzburg after the boys and I finished school.  The drive was amazingly beautiful, full of hills and mountains!  We stopped somewhere along the Wolfgangsee and took a small ferry to St. Wolfgang where we explored for a bit. 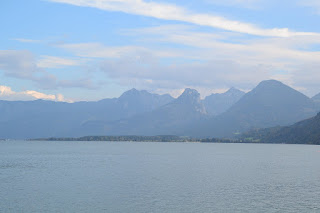 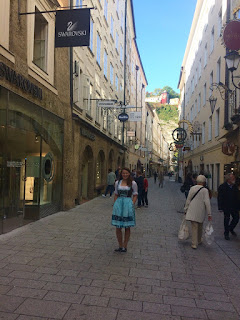 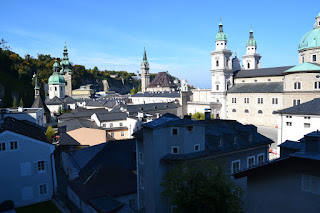 I also ate some more typical Austrian food!  We went out to eat in Salzburg and I got some meat dumplings (or Knödel) served over a LOT of sauerkraut.  It was really good.  I also had an alcohol-free "beer" to go with it.  Stress on the FREE as in NO alcohol.  Don't worry. 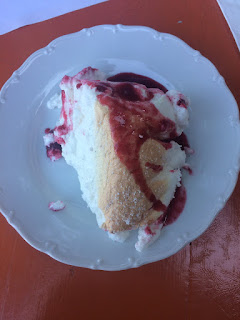 For dessert we had Salzburger Nockerl, which is a very light and fluffy dessert served with a fruit syrup.  Very sweet.

Saturday afternoon and evening was orientation!  It was a lot of fun and I had the chance to meet other exchange students from a bunch of different places.  We went over some rules, talked about our home countries, and got the chance to just hang out.  It was really cool to be able to hear about everyone's home country and their experience here so far.  I made a bunch of new friends.

I have definitely become a lot more comfortable speaking German, or at least what I know.  The other students in my class enjoy teaching the other exchange student and I very long words...


In German, you can sometimes put together a bunch of words to make one big word, which is what those pictured are.

They also taught me that the most important word is "Oachkatzlschwoaf"
which means the tail of a squirrel.
Apparently it is also dialect, meaning not everybody everywhere uses that word.

That is all for this week!